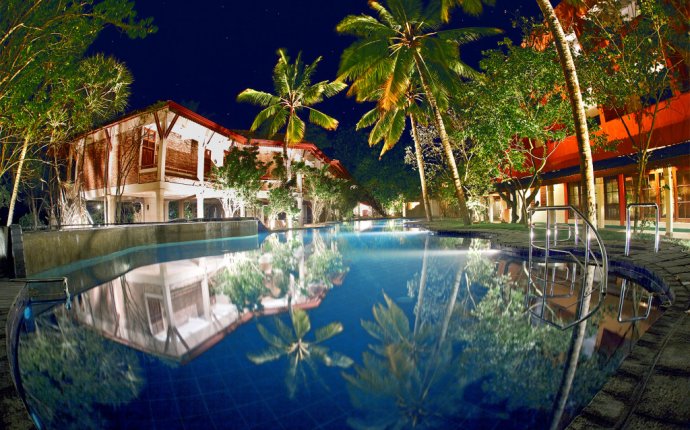 Barberyn Beach has some of the usual facilities one might expect on a tropical holiday - simple rooms with netted beds, balconies overlooking the Indian Ocean, a saltwater pool in a grove of coconut palms.

It also has a few unusual ones. Such as a restaurant where meals of fresh tropical fruit, curried vegetables and red unpolished rice, local fish, soups and salads are all prepared to provide the Ayurvedic balance of six vital flavours: bitter, sweet, salty, sour, astringent and pungent. And a treatment centre in which Ayurvedic doctors chant as they take your pulse, barefoot girls in nurses' uniforms straight from the Crimean War administer - in tandem - oily massages, a bath house with giant tubs reminiscent of some nightmarish sanatorium, and a steam house complete with giant Carry On-film steamers with a hole for your head to poke out.

In Ayurvedic medicine the body is regarded as a reflection of the universe and its matter: air and ether, fire, earth and water. Each individual is a combination of these doshas or elements, and when these are out of balance, bad humours, illness and disease set in. Diet is the cornerstone of Ayurveda, but herbal remedies and practices such as acupuncture and massage also feature.

After an initial consultation with Dr Pushpa, my routine varied little from one day to the next. Remedies - brownish medicines in stoppered bottles, powders to be mixed with either water or honey, and round black pills like rabbit droppings - were put into my pigeon-hole for collection. All of them tasted disgusting.

A typical day went like this: 6am medicine (diary says "pond water"); 6.30am yoga (which I usually missed), then breakfast (different pond water, reputed to aid weight loss so I always swigged it down), followed by powdered remedies. Routine treatments began around 9am.

These consisted of a head massage and a full body massage, ending with the application of herbal poultices like giant teabags. Then we had another glass of pond water, a rest in the herb garden while various pastes were applied, and a herbal bath in the scary bath-house followed by acupuncture.

The last was the best bit of all: Dr Damitha, the acupuncturist, had a fabulously gentle technique, and I always felt relaxed afterwards. Then it would be lunchtime. Afternoons were stiflingly hot and the pool parasols were inadequate, so generally I read on my balcony until afternoon tea, followed by more powder and pill-taking, an evening swim and dinner.

I became obsessed with mealtimes. Not because I was hungry, but because there was so little else to do. Food was plentiful and delicious, though the barley soup at lunchtime reminded me of school art-class glue. But I didn't mind eating curry-leaf soup before my fruit in the morning, and the cleansing effect of the diet became apparent after just a few days: I developed a spotty chin, but also realised that I was waking with fresh breath.

Afternoon tea was a good time to chat to the other guests. Vera, a pharmacist from Karlsruhe, was interested in the herbal remedies but didn't take her treatments too seriously.

"Of course I don't take my six o'clock medicine at six o'clock - I'm on holiday." Verena, a news journalist from Cologne, had trouble sleeping, and Kayoko from Tokyo suffered migraines. Most of the guests were women, but there were also two Swiss couples and a German actor who had come with his wife, a costume designer.

To anyone just arriving, we must have looked like characters from One Flew over the Cuckoo's Nest, sipping tea clad in our faded green cotton sarongs from the treatment centre and, in some cases, wearing calico headscarves stained with oil.

The scarf was part of a treatment called shirodhara, in which warm oil was poured slowly on to the forehead or second chakra - and left in the hair. This is repeated over a number of days and acts on the nervous system and the emotions. During this time you are advised not to read, shower or wash your hair and to avoid sitting in the sun and unnecessary talking. I managed two days before giving up - for one thing, the oil smelt like a bad house fire.

While the first week's treatments left me feeling cleansed and energised (and two pounds lighter, yippee), shirodhara, during my second week, brought on headaches, nausea and exhaustion - though Dr Pushpa reassured me that the symptoms would pass and that the next and final stage of the cure would be "rejuvenation".

But despite new pills and "rejuvenating" rice-milk massages I continued to feel nauseous and tired: "Dreaming of a holiday on a Greek island", I wrote on day 16. (It's only fair to point out, though, that some guests suffered no apparent ill effects from shirodhara, and one positively enjoyed it. With alternative treatments, individuals can experience very different reactions.)

During the third week my blood pressure was higher than when I'd arrived, though again, Dr Pushpa told me that this was normal after the treatments.

But sick of feeling sick, I decided to leave a day early, on day 19. Undeniably slimmer (10 pounds, according to the final consultation), I checked out and headed for the nearest five-star hotel.