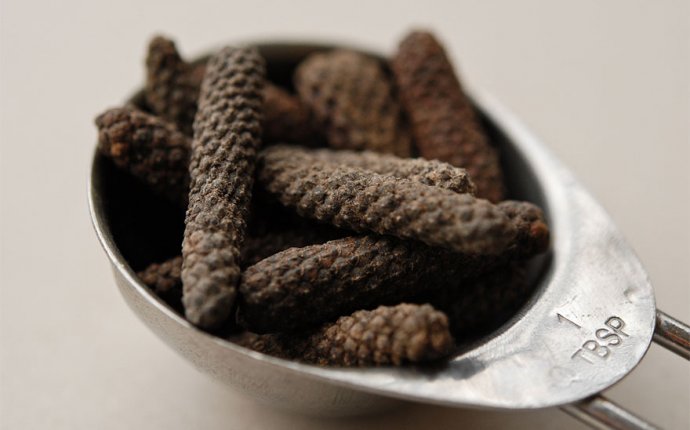 Indian Long Pepper, or Pippali, indigenous to North-eastern and Southern India and Sri Lanka, is a powerful stimulant for both the digestive and the respiratory systems and has been shown to have a rejuvenating effect on the lungs. Pippali plays an important role in aiding the thermogenic response, i.e. the release of metabolic heat energy. This effect is the result of increased thyroid hormone level in the body and makes Pippali a typical Ayurvedic complementary component whose benefit is to increase the bioavailability and enhance absorption of the other active ingredients.
Long pepper, which tastes pungent and sweet at the same time, probably came to Europe much before the now dominant black pepper. It is believed that during the Roman Empire, it was priced about three times more than black pepper, as it was perfect for Roman cookery, which especially favored these two taste sensations. Its hot-and-sweet taste goes well with spicy cheese specialties or wine sauces. In India, the long pepper is mainly used in pickles (achar).

Long pepper is also known and popular in parts of Africa, mostly in the Islamic regions of North and East Africa. It can be found in the complex spice mixtures of Morocco. It is an important ingredient in Ethiopia cuisine, where long pepper is usually found in the traditional meat stews (wat) together with black pepper, nut meg, cloves and turmeric. Berebere, a classical Ethiopian spice mixture, which resembles Indian masalas, is used to spice mutton dishes.

A scandent perennial aromatic shrub with jointed branches, the entire plant is pungent. The leaves are many and cordate, while the flowers grow on solitary spikes. The male and female spikes are produced on different plants, and while the male spikes are slender with narrow bracts, the female ones are 1.3-2.5cm, with circular flat peltate bracts. The fruit, which is very small, is sunk inside the fleshy spike, and is blackish green and shining. Long pepper is the unripe spike of the plant. It is that part of the plant that is used in medicines. The root, which is thick and branched, is also medically important and is called modi or pippali-moolam.

The fruit contains 1% volatile oil, resin, alkaloids Piperin and piperlonguminine, a waxy alkaloid N-isobutyl deca-trans-2-trans-4-dienamide and a terpenoid substance. The roots have piperine, periongumine or piplartin, dihydro-stigmasterol, which have been the reason that it is popularly used in traditional practice to promote respiratory health.

Piper longum grows well in sandy loamy soils, which are well drained. Soils with rich organic matter and good moisture holding capacity are good for its vigorous growth. As the plant likes a hot, moist climate, it can be grown in areas where there is heavy rain and relative humidity, as an under shrub in coconut and arecanut gardens on residual fertility. Cheemathipalli and Viswam are two improved varieties released from Kerala.

Long pepper is propagated through seeds, suckers or cuttings. One-year-old stem cuttings with 2-3 nodes are sufficient for propagation in nursery bags. The cuttings planted during March-April need a month, before the rooted cuttings are planted in the well-prepared field in convenient plots. To grow healthy, fertilizers are needed, since it is grown as an under crop, and in some cases as an inter-crop, along with Sesbania subabul and Gymnema. According to HFRC estimates, farmyard manure is sufficient for its growth, as the residual fertility also helps its sustenance. The crop needs irrigation once in a week if it is grown alone and, as an under crop, the irrigation given to the main crop is sufficient for its growth. The plant grows vigorously up to 3 years.

The first crop comes after 6 months of planting. The spikes are ready for harvesting 2-3 months after formation, and are only cut when they are blackish green and pungent. The harvested spikes are dried in the sun for 4-7 days until they become brittle. If the dried spikes are stored in airtight containers, the shelf life of the spikes is more and they can be stored up to a year.

Long pepper contains the alkaloid piperine (about 6%), which is slightly higher than in black pepper. Piperine has diverse pharmacological activities including nerve depressant and antagonistic effect on electro-shock and chemo-shock seizures, as well as muscular incoordination. It also contains one per cent essential oil, which exhibits antibacterial activities. A common use of the fruit is in the prevention of recurrent attacks of bronchial asthma (charakasamhita) and in malaria. The extract from the fruit of piper longum is standardized to a minimum of 1% alkaloid piperine. In a few weeks-clinical study with 20 children Piper longum extract significantly benefited respiratory function. Piper longum also enhances thermogenic response or releases metabolic heat energy.

It has been known to effectively reduce passive cutaneous anaphylaxis in rats and proteacted guinea pigs against antigen induced bronchospasm. (Dahanukar.S et.al.Indian Drugs 19:271(1982)

Piper longum differs little in its medicinal values from P. nigrum, as it is less aromatic and more acrid. It is widely used in Siddha, Ayurveda and Unani systems of medicine, particularly for diseases of the respiratory tract. The dry spikes of female types are used in the ayurvedic preparations like Pipalarishta, Pipplayasava, Panchakola, Pippalaya-diluha and Lavanabhaskar churnam. It is the major constituent of an ayurvedic preparation, Triaktu, which is prescribed routinely for a variety of diseases. The root is used for bronchitis, stomachache, and diseases of spleen, and tumors. It improves appetite also. The infusion of root is prescribed after parturition to induce the expulsion of placenta.