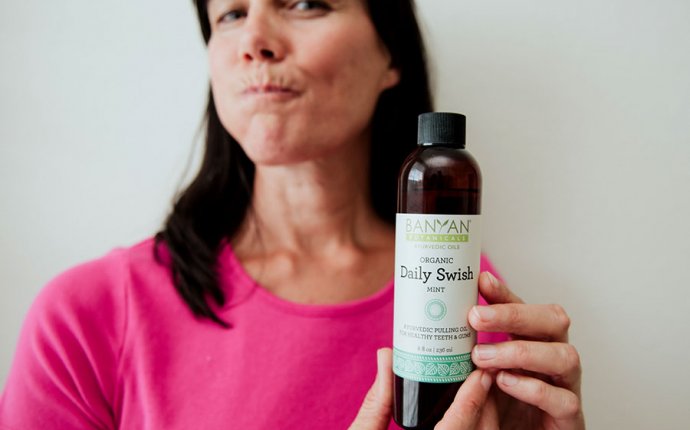 Oil pulling is the practice of swishing or holding oils from plants in the mouth for long periods of time to produce health benefits. It is an ancient folk remedy that has been researched, and while not all of the claims of oil pulling enthusiasts are true, oil pulling does have its uses.

Enthusiasts of oil pulling, also called Kavala Graha or Gandusha, claim that toxins and bacteria in the body build up in the mouth and that swishing or holding oil in the mouth for a prolonged amount of time will draw out these impurities or wash them from the mouth. Once the swishing is complete, the oil is spit out into a sink or trash basket.

"The whole purpose of oil pulling is to get rid of the oil-soluble toxins in the body, " said Puneet Nanda, creator of GuruNanda Pulling Oil and founder of Dr. Fresh Oral Care Line.

Some popular oils used in oil pulling are sunflower, coconut, sesame, olive and palm. While coconut is one of the most popular pulling oils, it becomes a solid below 75 degrees Fahrenheit (23.9 Celsius), creating a chunk that is hard to swish around in the mouth. "But when blended in correct proportion with sesame and sunflower oil for the purpose of achieving a doshic balance and a more thorough detox, the mixture will not harden, " said Nanda.

In the Ayurvedic health care tradition, doshas are bodily energies that determine a person's prakruti, or one's physical, physiologic and mental character and disease vulnerability. Factors such as stress, unhealthy diet, weather and strained relationships can all influence the balance that exists between a person's doshas. These unbalanced energies in turn leave individuals more susceptible to disease, according to the University of Maryland Medical Center.

Oil pulling is also used for dental purposes. Many claim that it strengthens gums, whitens teeth and eliminates plaque. Others use it as a treatment for TMJ, an ailment of the jaw.

A more extreme use for oil pulling is the treatment of disease. Some say that oil pulling cures cancer and other diseases by pulling toxins out of the body. In fact, oil pulling is cited as a cure for 30 different diseases.

Oil pulling originated in India as part of natural healing practices described in ancient Ayurveda texts, according to the National Center for Biotechnology Information (NCBI). Ayurveda is a holistic system of medicine that was formed around 3, 000 to 5, 000 years ago. The oral health practices of Ayurveda include crewing on sticks and eating herbs, as well as oil pulling.

Original practitioners of oil pulling used sunflower and sesame oils as a way to prevent bleeding gums, decay, dryness of throat, oral malodor, cracked lips and for strengthening teeth, gums and the jaw.

So does oil pulling work? Well, yes and no. While research has found that oil pulling does help with certain health issues, it has not been proven to help with others.

For example, a 2009 study published in the Indian Journal of Dental Research found that when compared with mouthwash, swishing with sesame oil reduced plaque, modified gingival scores, and lowered microorganisms in the plaque of adolescents with plaque-induced gingivitis.

A 2014 study published in the Journal of Clinical and Diagnostic Research found that oil pulling with sesame oil helped in reducing oral malodor and the microbes causing it just as much as using a chlorhexidine treatment. A 2011 study published in the Journal of the Indian Society of Pedodontics and Preventive Dentistry found oil pulling to be as effective as chlorhexidine in the treatment of bad breath.

It is important to note that these studies did not find that oil pulling was an adequate treatment. It simply found that it worked just as well as a treatment with chlorhexidine, which is an antimicrobial mouth rinse.

Also, the American Dental Association (ADA) criticizes existing studies as "unreliable" for a number of reasons, including: misinterpretation of results due to small sample size, absence of negative controls, lack of demographic information and lack of blinding. According to the ADA, "scientific studies have not provided the necessary clinical evidence to demonstrate that oil pulling reduces the incidence of dental caries [cavities], whitens teeth or improves oral health and well-being."

Citing a "lack of science, " the ADA does not recommend oil pulling as either a supplementary oral hygiene practice, or as a replacement for standard oral health behaviors.