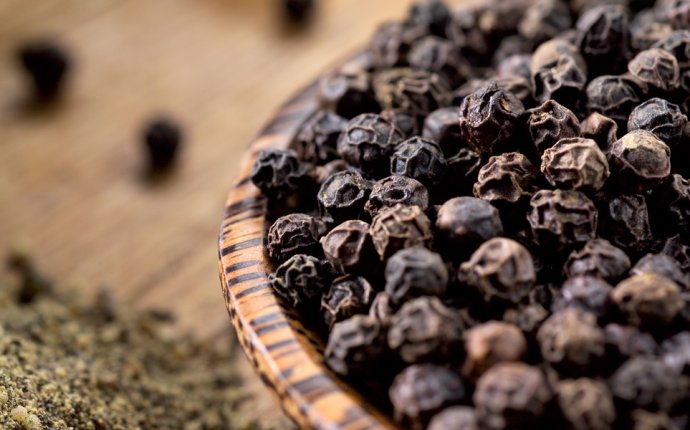 Has been in common use for thousands of years in the old world and is the most popular spice of our modern day. It accounts for 1/5 of the total spice trade in the world.

The history of pepper begins in prehistoric India and Southeast Asia where the pepper vine grows naturally. It then spread to the ancient Egyptians and Romans and later was in the spotlight during the height of the early European spice trade routes.

I am black on the outside, clad in a wrinkled cover, Yet within I bear a burning marrow. I season delicacies, the banquets of kings, and the luxuries of the table, Both the sauces and the tenderized meats of the kitchen. But you will find in me no quality of any worth, Unless your bowels have been rattled by my gleaming marrow.
-A riddle authored by Saint Aldhelm, a 7th-century Bishop of Sherborne

A Little History of Black Pepper

is native to India and Southeast Asia. It appears to have been in use in India for at least the past 4, 000 years, but presumably much longer.

Our scant knowledge of peppercorns in ancient Egypt is limited to one of the greatest pharaohs, Ramesses II, who was found to have black peppercorns stuffed in his nostrils as part of the mummification process following his death in 1213 BCE.

Flash-forward a few hundred years later and we have a Roman cookbook from the 3rd century that contains peppercorn in many of its recipes, although it was probably a very expensive spice at the time.

When Rome was attacked by Attila the Hun and King Alaric I in the 5th century they demanded, amongst other things, 3, 000 pounds of peppercorns each. Although Rome quickly complied with their demands they attacked the city anyway, which is thought of as the fall of Rome.

During the Middle Ages peppercorns were considered an important trade good. They were referred to as “black gold” and were even used like money to pay taxes and dowries.

White, Red, and Black Pepper... Among Others

When buying whole peppercorns you might notice that there are red, white and green peppercorns in addition to the black peppercorns.

All of these come from the same plant but are prepared differently to achieve the different look and slightly different taste.

are harvested when unripe, boiled briefly and then dried in the sun.

are harvested when fully ripe and then have the outer flesh removed so that only the seed remains.

are harvested when unripe and then treated in a way to preserve the green coloring either through freeze drying, pickling or other means.

are harvested when fully ripe and then treated in a way to preserve the red coloring.

You can buy at Mountain Rose Herbs. By using this affiliate link you help support this site. Thanks!

Galen, in treating of the pepper in his work on Simples, merely says of its medicinal powers, that it is strongly calefacient [warming] and desiccative [drying]. -PAULUS AEGINETA