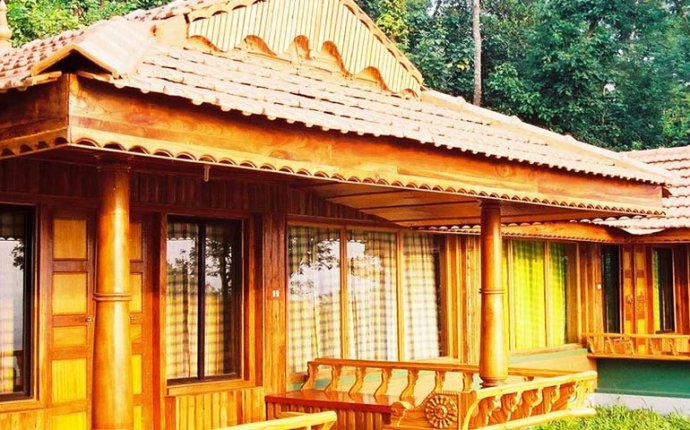 Most cleanses involve a string of green juices and maybe some time in the sauna to detox. I, on the other hand, went a little (fine, a lot) more of a drastic route: I willingly drank butter, inhaled herbal smoke, and vomited more than I ever had in my life as part of a traditional 28-day Ayurvedic cleansing program known as Panchakarma and Rasayana. Yup, you heard me right.

Let’s start at the beginning. In my 20s, I could party all night and eat processed foods all day. But by the time I hit my 30s, that hard living—combined with over-use of antibiotics and about a decade of work stress—caught up with me, and no amount of eating better or trying every fitness craze could right my fatigued, bloated ship.

So while there are plenty of killer Ayurvedic spas stateside devoted to the traditional Indian holistic medicine, I decided to do something drastic. I quit my corporate job, packed a bag, and spent a month wellness-hopping between Ayurveda Yoga Villa (AYV) and Udayagiri Mountain Retreat, two locally owned retreat centers in Kerala, India—AKA, the birthplace of Ayurveda. If I wrote a memoir of my journey, it would have been called Eat, Work, Cleanse. This would be the expurgated version…emphasis on the purgation.

Ayurveda Yoga Villa is set on the bank of the Kabini River, secluded by trees and beautiful fauna. Guests get an initial health assessment with Dr. Vipin, AYV’s retreat director, to determine the source of your ailments. Turns out, my dosha (AKA your personal constitution) was seriously aggravated.

The prescription? A customized one-two punch of panchakarma, a five-step, 21-day process to basically flush every toxin harbored in my mind and body and reinstate equilibrium, followed by rasayana, seven days of immunity-building treatments to maintain my newly cleansed and balanced self. These are the most intensive cleansing practice the modern wellness world has to offer. And I was not going to shy away.

Some of the lifestyle practices during this time were pleasant: Because Ayurveda places emphasis on the importance of cleaning up your whole system, I was put on an all-vegetarian, all-natural diet—which excluded alcohol, fruit (except for bananas), and caffeine. I was scheduled for daily massages with medicated herbal oils and steam baths, hatha yoga and meditation, and unplugged from all modern-day distractions (including the internet and Scandal). Of course, that was the easy part.

Here’s a closer look into exactly what my super-cleansing panchakarma journey entailed.

Ghee, a type of clarified butter, is like the coconut oil of Ayurveda—a utility player used for everything from cooking to soothing bug bites. Cow ghee specifically is an excellent aid in bringing vata and pitta doshas back in balance by collecting toxins in your body. So, I drank ghee mixed with medicinal herbs once a day (and burped it back up far more than that—a sign your body is digesting it) for three consecutive days, until it started coming out of both ends, indicating that my body could no longer absorb it. Yay?

Fortunately I’d had practice with my ghee therapy, because the next day, I was sitting in a treatment room at 7 a.m. with a plastic bucket in front of me quickly drinking seven liters of milk, medicinal water, and salt water as doctors and specialists cheered me on to continue drinking and vomiting. Its target is your mucus buildup, and it’s probably the one part of this process that makes most people say, “But why?” Even me. When it was over I felt like I had gotten hazed by the Ayurvedic gods.

What goes up must come down, and I was given an extremely bitter herbal laxative to drink, with a chaser made of jaggery (sugar cane) and sweet spices to mask the bitterness. (News flash: it doesn’t.) The goal? To eliminate excess bile—that pesky pitta problem Dr. Vipin diagnosed me with when I arrived. I spent the entire day in my room hovered over the toilet, with the staff periodically checking how many times I’d “gone.” The final tally was 22, with each trip to the toilet reducing as the hours passed by, until I was rewarded at the end with fresh coconut and salted rice water to replenish my electrolytes and prevent dehydration and cramping. You can guess how cool, clean, and delicious it tasted after all that.

Step 4: Three days of herbal medicine through the nostrils (nasyam)

For three days, drops of an herbal concoction, primarily made of ginger, were administered into my nostrils, followed by a sinus massage to “circulate the herbs through my nasal cavity.” The benefit, I was told, is that it removes mucus clogs, cleans and clears the head channels, and stimulates the brain cells and central nervous system. I’d say it worked—I nearly knocked my technician over when I shot up on the treatment table at the zing of the ginger. The treatment ended with me inhaling herbal smoke through each nostril and then exhaling it out of my mouth to “dry out any remaining fluid in my sinuses.” As a frequent sufferer of sinus infections, I don’t think I’ll ever have to see my ENT after this.

Based on your individual therapy and progression, a combination of small and/or large enemas (herbal oil-, water-, or milk-based) are administered to “discharge toxins from the colon and urinary tract.” I’ll save you the TMI details of this—except to say that despite my therapist urging me to make it for at least a full minute with the enema inside me, 20 seconds was my record before dashing to a toilet. After days of this, magically, I was done.

I headed into my rasayana, where I continued my yoga and clean-diet blitz before heading back into the real world. It was a helpful airlock after seeing things through the Ayurvedic lens of doshas and orifice flushing for a month.

So was it worth it? For me, yes. I was energetic again, my head felt clear for the first time in ages, my face and body were no longer bloated, and my skin was glowing (just to name a few of the benefits). I continued to reap the benefits of my transformation for a few months. Even as I slowly started to eat meat, sugar, coffee, and alcohol again, I didn’t feel as sluggish as I had before.